WE ARE CLOSER TO THE CIVIL WAR THAN WE THINK


There are people still alive and eloquent who knew men who fought in the Civil War. Ephraim Slaughter enlisted in the 3rd North Carolina Colored Infantry as Ephraim Newsome in January 1864. The next month, the regiment was re-designated as the 37th United States Colored Troops. As a part of General Benjamin F. Butler’s Army of the James, Slaughter’s regiment participated in the campaign against Petersburg and Richmond and was a part of the force that captured the closet position to Richmond in the battles of Chaffin Farm and New Market Heights in the fall of 1864. Slaughter’s regiment became a part of the 2th Corps in December. It however was in North Carolina when Richmond was captured by the 25th Corps in April 1865. The regiment participated in the captures of Fort Fisher and Wilmington in February 1865, advanced on Raleigh in April, and was present when General Joseph E. Johnston surrendered to General William T. Sherman at Bennett House in April 1865. Calobe Jackson, Jr. of Harrisburg knew Slaughter who was an eyewitness to these defining events in American history.

As a child, Calobe Jackson, Jr., now 85 years old, attended the Annual Memorial Day Parades in Harrisburg. Pennsylvania had provided more human and material resources to the Union war effort than any other state, and the soldiers and sailors who fought in the War of the Rebellion were held in the highest esteem in the Keystone state. Young Calobe recognized these venerated veterans dressed in uniforms of the GAR as honored participants in the parade, and he wondered what “GAR” meant. Ephraim Slaughter was one of the venerated veterans of the local GAR post, and he lived only three blocks from Calobe’s family home. Slaughter was also a frequent visitor to Calobe’s father’s barber shop. Though Calobe knew two United States Colored Troops veterans growing up in Harrisburg, he did not know the true measure of their contributions. He did learn that “GAR” meant the Grand Army of the Republic.

In his father’s barber shop, Calobe learned that there was an African descent general buried in Harrisburg’s Lincoln Cemetery—General Thomas Morris Chester, a native of Harrisburg, born in 1834. During the Civil War, General Chester was a war correspondent with the Philadelphia Press and was the only African American war correspondent to write for a daily newspaper. However, his covert military activities in the struggle to abolish slavery were so well respected that Civil War veterans in Louisiana serving in that state’s government, such as Governor P.B.S. Pinchback and Lieutenant Governor Cesar Antione, supported the appointment of Chester to adjutant general of the Louisiana state militia in 1875. Why and how this native of Harrisburg became a Louisiana militia general was unknown to young Calobe. He simply knew from barber shop talk that General Chester was from Harrisburg and was buried in Lincoln Cemetery.

﻿
After two years at Lincoln University, Calobe Jackson, Jr. was drafted and served as an engineer in the U.S. Army’s last segregated engineer battalion. Growing up in Harrisburg’s integrated school system, the Army was his first experience with institutional segregation. Jackson points out that William Howard Day was the first African American on the Harrisburg School Board; Day spearheaded the successful effort to integrate Harrisburg schools in 1883. Day, the son of a War of 1812 naval hero John Day, was born in New York City in 1825. After being commissioned by President Lincoln in February 1865, Major Martin R. Delany said Day was deserving of a higher position than he for “arranging for the slave enlistments along the Underground Railroad.” Calobe informed me that Day is also buried in Lincoln Cemetery.


﻿﻿
Today, Calobe Jackson, Jr. is the commander of the Ephraim Slaughter American Legion Post #733. Slaughter was a native of North Carolina. He moved to Harrisburg after the war. Commander Jackson was 12 years old when Slaughter died in February 1943. His grave site is prominently marked in Lincoln Cemetery. However, unlike the other esteemed veterans of the War of the Rebellion buried in the cemetery, his headstone does not note the fact that he was one of the venerated veterans. After interviewing Commander Jackson at the National Civil War Museum, where a life-like wax figure of Slaughter is on display, Commander Jackson offered to take me on a tour of Lincoln Cemetery. 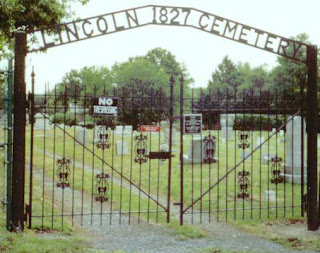 On our way to the cemetery, we discussed the fact that men such as Day, Chester, Delany, Pinchback and Antoine had very different opinions of Abraham Lincoln than many contemporary African American scholars. Clearly, these men who fought to abolish slavery held Lincoln in high esteem for the work he did to assist them in their abolitionist fight. Yet, many contemporary scholars, especially those who do not know the military accomplishments of United States Colored Troops and Lincoln’s Legal Loyal League (the 4Ls), argue that Lincoln did not care for the slaves and could have and should have done more to liberate them. Yet, the African descent officers, soldiers, sailors and spies who victoriously marched into Wilmington, Charleston, Raleigh and Richmond knew themselves to be liberators—with Lincoln as their Commander-in-Chief leading them to victory. They had witnessed their comrades and their Commander-in-Chief give “the last full measure of devotion” for a “new birth of freedom.” At Lincoln Cemetery, the voices of those who made sacrifices in the struggle to abolish slavery while saving the Union were all that mattered to me, and my respect for Lincoln and the veterans, those who sacrificed, was renewed.

A memorial honoring African descent veterans of all wars is located in the southwest corner of the cemetery. The inscription on the back of the monument is from Luke 4:18. When I read “to preach deliverance to the captives,” I was reminded how incorrect the Marxist influenced scholars are who teach that Christianity was used to keep the African and his descendants enslaved in America. At the gravesite of Civil War veteran and President of Harrisburg’s Garnet League, John Price, I noted that these men and women were Christians who believed that God was sure to deliver the American captives. Acting on their faith, these Christian warriors, Buffalo Soldiers, made personal sacrifices to bring about that deliverance. In Lincoln Cemetery, Christians, such as Reverends Price and Day, along with over 60 other freedom fighters (Buffalo Soldiers) who sacrificed to deliver the captives are laid to rest. These Christians were Buffalo Soldiers because they answered Reverend Henry Highland Garnet’s call for freedom fighters in an 1843 Convention in Buffalo, New York. Commander Jackson who knew two of these Buffalo Soldiers has worked to lift their voices.

This article is the first in a series Hari Jones is writing in conjunction with a lecture series at the National Civil War Museum in Harrisburg, Pennsylvania entitled the “Lost Story”.
Posted by Unknown at 1:22 PM 1 comment: